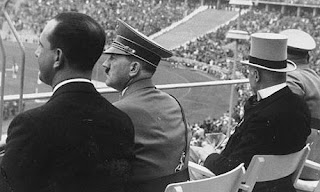 Adolf Hitler takes in the action during the 1936 Olympics Photograph: Getty

1) The Führer at the Fußball

Adolf Hitler was not a huge fan of football. That didn't stop him gaining propaganda points when England visited Berlin in 1938 to give the stiff-arm salute in front of Joseph Goebbels before a 6-3 win – a salute which only became infamous years after the war, garnering not a comment from the English players or press at the time. Nor did it stop him actually attending in person a game at the 1936 Berlin Olympics – though these were a bit more of a PR disaster for the toothbrush-tached tool.

Four days before Germany's second-round match with Norway, Hitler had attended the final of the 100 metres, looking on in impotent rage as Jesse Owens stormed to victory, before doing some storming himself, right out of the Olympiastadion at high speed. This would be no better a day out. Germany had easily beaten Luxembourg 9-0 in the first round, and Hitler arrived expecting the team to easily dispatch Norway. "The Führer is very excited," wrote Goebbels in his diary days before the game. "I can barely contain myself, a real bath of nerves." Goebbels was right to be so apprehensive. Along with Hitler and Rudolf Hess, he witnessed Norway coast to an easy 2-0 win. "The Führer is very agitated," wrote Goebbels. Hitler left the arena with his temper gauge turned all the way up to elf.

Hitler never watched a match again, so he missed the next football-based PR disaster for the Nazis. At the 1938 World Cup, in the wake of the Anschluss, Sepp Herberger picked a Greater Germany side containing an almost equal number of Germans and Austrians. The policy benefited nobody: Austria, one of the teams of the 1930s, were on their way down, stymieing the improving Germans. Neither faction got on either, spending most of the time in training petulantly volleying balls at each other's heads. Switzerland sent the German-Austrian dog's dinner packing 4-2.

Benito Mussolini was a huge fan of football. So much so that before the 1938 World Cup final between reigning champions Italy and Hungary, he sent the team a note of support. "Vincere o morire!" it read. Loosely translated, the note was taken by the outside world to mean "win or die". Luckily for the Italians, they won 4-2, with Hungary's defeated keeper Antal Szabó quipping dryly after the game: "I may have let in four goals but at least I saved their lives." It's a brilliant story of despotic brutality – only slightly marred by the fact that the telegram was really was a note of support, a rallying cry in the vernacular along the lines of "win or bust".

Italy's fascists did manage to scar one of the quarter-finals, though. Drawn against hosts France in Paris, they had lost the toss for the right to wear their first-choice Azzurri strip, so instead of turning out in their usual white change strip, ran out in some natty black shirts instead. The symbolism wasn't lost on an incensed home crowd, who were witnessing one of the World Cup's most depressing spectacles. Not for the first time in the late 1930s, the fascists won.

With a searing irony, that very same match provided the World Cup's all-time comedy pinnacle. After nine minutes of tense battle, Italian striker Gino Colaussi hoicked a hopeless looping shot towards the goal. The ball was going straight down French keeper Laurent Di Lorto's throat, but instead of gathering calmly the hapless netminder spiked the lame effort volleyball-style into the roof of his own net then, chasing after a ball long since over the line, sprinted face first into a nearby post.

The sheer purity of the slapstick was enhanced by juxtaposition. With the arguable exception of the junta-pleasing Argentina games at the 1978 finals, that quarter-final was perhaps the grimmest match in the history of the World Cup.

With Fifa offering only one place at the 1966 World Cup to the federations of Africa, Asia and Oceania, 16 countries withdrew in protest at the outrageously loaded structuring. With Algeria, Cameroon, Egypt, Ethiopia, Gabon, Ghana, Guinea, Liberia, Libya, Mali, Morocco, Nigeria, Senegal, South Korea, Sudan and Tunisia all withdrawn, and apartheid South Africa suspended by Fifa, this sorry state of affairs left Australia to play off against the Democratic People's Republic of Korea for the right to compete in England. Two matches were held in Cambodia in November 1965, the Koreans winning both easily, 6-1 and 3-1.

Yet still they were a whisker away from not competing in England. The problem was that the government of the United Kingdom did not officially recognise the Democratic People's Republic of Korea. The Foreign Office initially threatened to deny the Koreans entry visas to the country, but they were told to wind their necks in amid fears Fifa would take the finals away from England. So another plan was hatched. On 9 December, F.O. mandarins produced a report, entitled North Korean Participation In The Finals Of The World Cup. It demanded the country be referred to as "North Korea" and for their flag and anthem to be banned.

Pedantry turning into farce; neither ban was workable in practice. The flag diktat was overturned, while the problem of the anthem was circumvented. National anthems were only played at the opening game and the final; the Democratic People's Republic of Korea's anthem was never heard at the tournament. It was a unique arrangement and one not since repeated.

The 1957 Coupe de France final was played bang slap in the middle of the Guerre d'Algerie, the Algerian War of Independence. Ali Chekkal, former vice-president of the Algerian Assembly, and a man opposed to independence from France, was in the VIP box at the Colombes Stadium in Paris alongside French president Rene Coty. He was there to watch two of the 76 Algerians then playing in France – Said Brahimi and Abdelhamid Bouchouk of Toulouse – contest the cup final against Angers.

Chekkal, who had lobbied the United Nations to justify a continued French presence in Algeria, was a marked man in the eyes of radical Algerian activists, who distributed pamphlets ordering him to be shot on sight. Having witnessed Brahimi and Bouchouk help Toulouse to a 6-3 win and pick up the trophy from Coty, Chekkal left the stadium and waited for a car to whisk him back to his guarded hotel room. It would not arrive in time: unemployed plumber Mohammed bin Sadok approached Chekkal and dispatched a bullet into his back. While bin Sadok was, according to reports, "severely beaten" by police, Chekkal was whisked to hospital. But within hours he was dead, victim of the only political assassination at a major football final.

"I chose Chekkal because he was the last Muslim friend of the French," explained bin Sadok. The assassination was – literally – one of the first warning shots in Algeria's battle for independence, with football seen as a crucial tool. (According to Le Monde, the French public was "more sensitive to Algerian footballers than Algerian politicians".) In April 1958, eight French-based Algerians – including Brahimi and Bouchouk – defected to play for an Algerian Independence Movement team. Many such players eventually returned to France after Algeria finally gained independence in 1962, as they were seen as Francophiles in their homeland.

Eric Cantona's famed leap into the Selhurst Park stands has a certain balletic – and comedic – grace, but as kicks go it was nothing compared to Dinamo Zagreb midfielder Zvonimir Boban's attack on a policeman during a game against Red Star Belgrade in May 1990.

At the time, Yugoslavia was being held together by a thread. Communism was kaput, nationalist tensions between states were rising, and independence was on the agenda. Matches between Red Star, from Yugoslav and Serbian capital Belgrade, and Dinamo, from the capital of Croatia, were fiery at the best of times, and often overshadowed by violence. This match was no different.

As the match at Dinamo's Maksimir stadium began, Red Star fans had already started to rip up the stadium seats. The Yugoslavian – and in the eyes of the home crowd pro-Serbian – police stood by and watched. In retaliation, Dinamo fans jumped over the ground's barriers and headed for the Red Star end. What followed was a mass brawl so bad that some players and fans had to be airlifted from the stadium. In the midst of battle, one Dinamo fan was knocked to the ground by a baton-wielding policeman. Boban intervened – high-kicking the officer in the face and earning himself instant legendary status.

The riot – and specifically Boban's actions – were seen as the symbolic kick-start of Croatia's bid for independence. Even though it was later found that the policeman Boban kicked was in fact not a Serb, but a Bosnian Muslim.

Will you look at the state of this pair of gurning clowns? 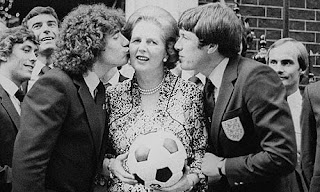 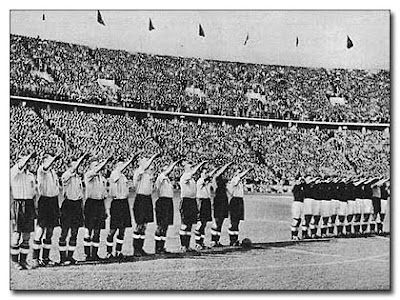